The recent Macbook Pro launch started an avalanche of discussions about what Apple has done wrong, how the MBP is not a real pro device and how the machine's only purpose is to get money from rich iSheep. Looking at Mac related discussions forums, there seems to be a vocal group of people who have had enough and they are moving away from Apple to Windows/Linux/you-name-it OS.

Some of the loudest arguments that got repeated to death:

Well, as it stands, I ordered one of the 15" beauties with almost maxed out configuration (only constraining myself to 1TB instead of 2TB - Ouch, screamed the wallet). Why? Let me try to explain.

I like UNIX, I like macOS. Upgrades are different. My previous laptop was from year 2009 making the 2016 tMBP an excellent upgrade!

Switching to a Mac in the first place

Looking back at my computer history I started with a PC - DOS, Windows 3.1, 95, NT, 98, 2000, ME, XP. In 1996 I was exposed to FreeBSD and Linux (Slackware) which i grew to love enormously, but purely as a server side OS. A big part of why I loved and used Windows at the time on my Desktop, was the games. I didn't care much for the OS itself, but it was the standard at the time for productivity/document authoring (Office) as well as entertainment/gaming - remember, this was all before Web 2.0 explosion.

I don't count the times when I had a multiboot setup or experimented with different Linux desktops, because it doesn't really count if you don't use it as a daily driver. I remember that there were severe limitations accessing NTFS partitions from Linux side and vice versa creating data silos. During the experimentation phase I quickly realised that I needed a single OS, switching between different two worlds wasn't for me.

I don't recall when I made the switch, but I do remember the game that finally pushed me over to the Linux side - it was Neverwinter Nights Linux client release. After that, in 2003, I found that, hey, I can live in Linux! 🙌 Wine was able to run MS Office programs, so I made the decision to see it through and the disk/partition that hosted my Windows installation was slowly forgotten.

Still, I can't say my Linux desktop experience was smooth. Actually, it was quite the opposite. Driver issues and compatibility as well as the whole upgrade experience became an hurdle. This was partly due to Linux dependency-circle-of-hell that eventually always surfaced. Some of my mandatory commercial driver packages contributed to this issue a lot. Every upgrade started to become a challenge to get everything working. This kind of constant (re)configuring started to distract me.

Late 2004 I started to look around for a laptop due to increased traveling and my experiences with Linux on the Desktop as well as multiple sources stating that Linux in laptop is a bumpy ride (drivers, power management) made me look elsewhere. A coworker of mine at the time had made the jump to experiment Apple's Mac OS X and demonstrated proudly his new iBook G4. Already then, the white plastic shell looked like something straight out from a sci-fi movie. The owner of it was also a Linux fan, so it was a good reference to begin with.

The winning arguments at the time was that OS X was really a UNIX OS at heart. There where two package managers Fink and DarwinPorts bridging the world to GNU and OSS so this made my soon-to-be-system familiar even before I had one. Another winning argument was that the software and hardware came from a single company - no driver issues guaranteed! If something didn't work, you knew whom to blame. As an added bonus, the gaming situation, although not comparable to Windows, was much better than in Linux, so it felt like I was gaining something. 👌

I did get a word of advice from another Apple "pro" user to stay away from iBook and look towards more capable PowerBook. I was oblivious to the PowerPC CPU situation, nor did I have any insight to the rumors about Apple switching to Intel. I was just happy when in early 2005 I found a good offer on a barely used PowerBook G4 17" which was a BTO/CTO configured machine. The top of the line model available at the time.

This machine was marvellous piece of engineering. The software worked so well on the laptop that first time ever I started to rely on laptop sleep function. The UI was refreshing, everything was running smooth and with the help of Quicksilver, launching applications was superfast and intuitive. It was remarkable experience that showed how hardware and software can work together. It quickly made my Desktop PC obsolete. This happened 12 years ago.

In retrospective, I was bummed when Apple announced that it will be switching to Intel based CPUs already during the same year when I had bought my first Mac. However, the effects of how and what it would mean to me as a user were unknown. Apple kept improving its OS and as long as my machine was supported, everything worked really really well making me a happy user. Because of the significant number of PowerPCs out there, the support for the architecture remained strong.

I ended up using the trusty Powerbook until 2009 when Apple launched the new Unibody design. I switched to a Macbook Pro 17". Comparing to the competition, it was strongly ahead. It was a beautiful piece of engineering that also cost arm and a leg but I already knew what to expect and I knew it was worth it. I ended up getting the "cheapest" 17" MBP one could buy (brand new this time), but I did end up upgrading the memory and switching to SSD at a later time. I knew the journey I was on and I was comfortable knowing that the investment in the machine will be for many years to come. The launch of the Unibody received some screams as well, Apple had chosen to go with a glossy screen as default, although offering matte BTO/CTO option. I remember a lot of the comments about this being not a pro move.

In 2011 I started to use a 2009 15" Unibody MBP that I received from work. As my wife had used the Powerbook G4 to write her Master's thesis (showing some challenging performance issues) and planned to start her PhD dissertation, I proudly handed the 17" Unibody to her, she's been happy with it to this day.

In 2012, mainly out of curiousity, I built myself a Desktop machine with passive liquid-cooling and I squeezed OS X on it with an ulterior motive to occasionally play something on Windows 🤡. The i7-3770K machine hasn't given me any headache. I've upgraded from one macOS version to another and the only components that have changed are either SSDs (I currently run 2x1TB SSD in RAID-0 configuration) or memory (now @ 16GB). Some trickery and magic were needed at some point to get iCloud and some other services to work. I don't really fancy that. It's clear that although Apple doesn't actively block the Hackintosh crowd, they don't necessarily make their life easy - protecting their cloud infrastructure and customers, it all makes sense. However, there has been no urge for me to boot into Windows 10, other than the occasional AAA game title that gets launched. I dream more about gaming than I have actually time to enjoy them - such is life.

Oddly enough, I was still quite happy with the 2009 models. Although I know that there has been plenty of improvements over the years, none seemed significant enough for me to go out and buy a new machine.

Latest version of macOS changed that. Apple doesn't support installing the newest MacOS 10.12 "Sierra" on our 15"&17" 2009 Unibody models, nor will I start to force it. There's no real point to it. My wife is happy with that machine and I figure El Capitan will receive security fixes for the next year or two. Kudos to Apple making planned obsolescence work that well. Suddenly, I was on a lookout for a new machine.

For me, when I saw the announcement of the 2016 model I knew it was time for me to move on, not away.

The choices we make in the past and the experiences we gain, shape our decisions for the future.

Looking back more than 10 years with Apple, I've had only 2 different Mac generations, the PowerBook and the 2009 Unibody. Both did receive some minor upgrades (battery for the G4, SSD and/or memory for the Unibodies) but they have proved themselves to be battle worthy. I didn't have any issues with them nor did I have any complaints - why should I change? Just because the rage on the Internets? Nope.

Speaking of complaints, let's circle back to the original list of screams about the 2016 MBP to see how I feel about things:

Some reasons I'm not switching away:

Intro Digi is quite famous for its confusing portfolio of XBee radios that over the years have been featured in numerous DIY projects and are available from many hobby shops. There are literally tons of guides out there to get you started. They usually start by configuring the radios so 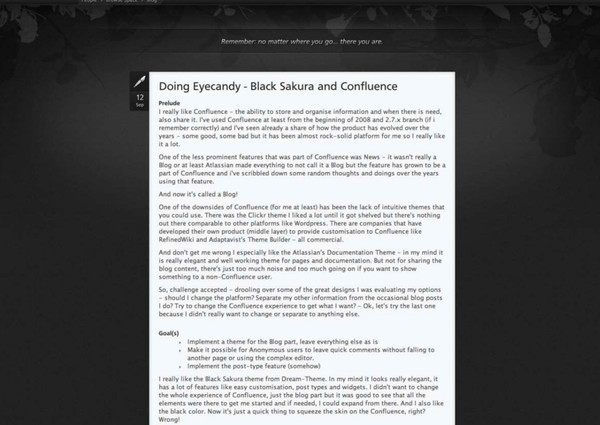 It all started simple enough, a simple wiki to host different projects and experiments. Among all the other great functionality for the time, It also had a "News" feature that at a later date evolved into a blog. But The Times They Are A Changin', so it's been

Ghost is not new to me. I've patiently waited while the software matures to the point that I can migrate away from my current Atlassian Confluence setup that I have been running since 2008. Confluence is (was) great, but for personal use it's simply a piece of complexity that requires